IN SAFARI. The Kalahari Desert in Botswana Africa may not seem like a place where you can find any form of extravagance. But in the lush alluvial plains of the Okavango, only a hardy traveler could appreciate the comfort.

The name “Kalahari” comes from the setswana word Kgaladi, meaning “the great thirst”, and the Bushmen of this desert accept it without question. For 30,000 years, they survived here under rules dictated by the absence of water. Botswana’s official currency is the pula, which of course means “water”. In a parched world, nothing has more value. It’s a curious counterpoint for a nation in which 85 percent of the country is as dry as wheat toast. The sterility of the Kalahari extends over an area roughly the size of France. But in the Okavango Delta, there are nearly three dozen tented safari camps scattered across the alluvial plain. They are not “tents” in the usual sense of the term. Camps like Xigera, Duba Plains and Selinda are wonderful canvas retreats.

The tents are as large as hotel rooms and include hot and cold running water, showers, toilets, full electricity and all amenities. Forget the crispy sleeping bags – camps like these have beds so soft that any couch potato would think it’s dead and gone to a better place. You see, there’s camping, and then there’s camping. 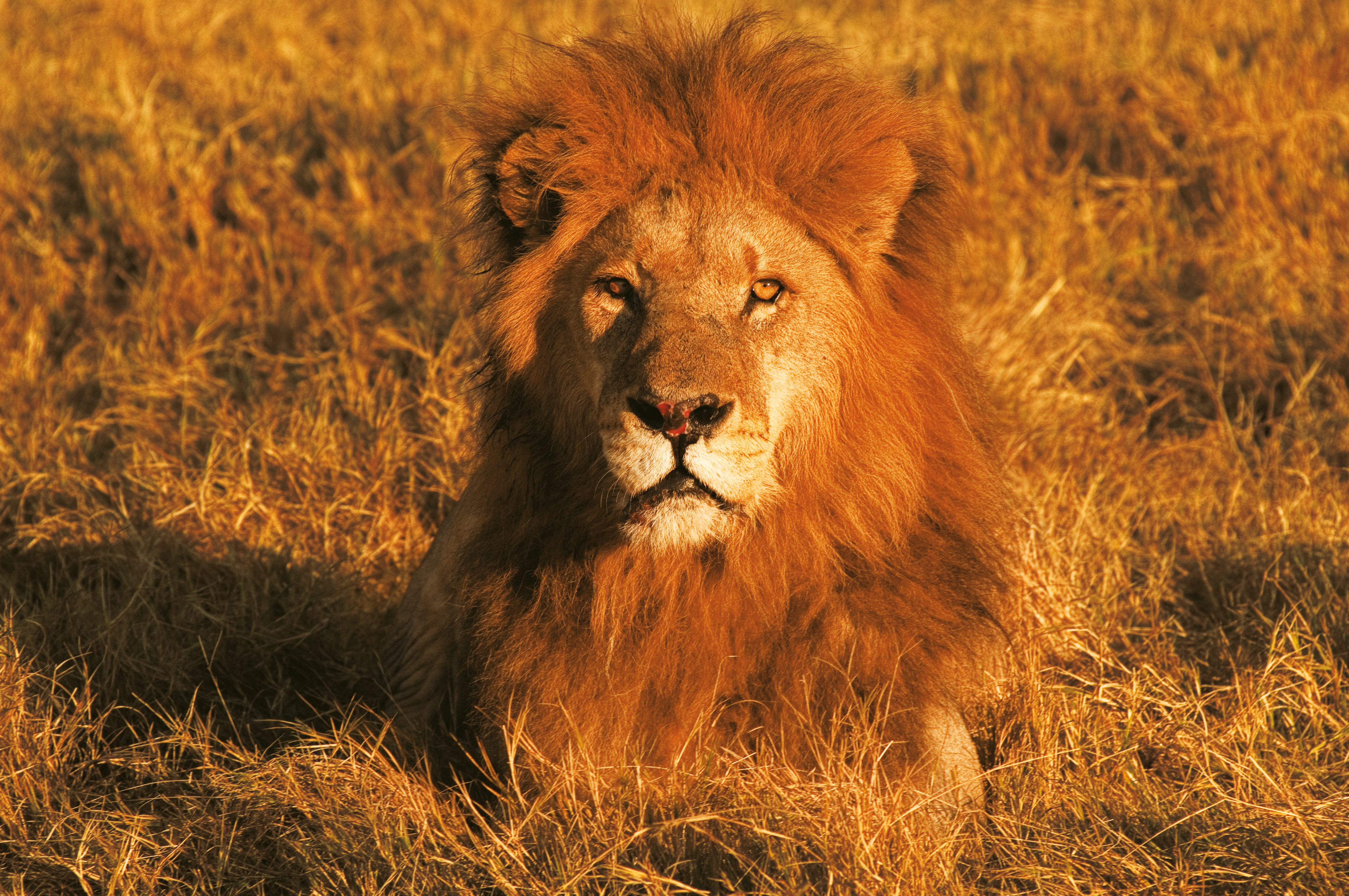 The individual concessionaires who operate the safari camps provide board and lodging at a single price. Some accommodations cost over US $ 400 per night. A 10 day tour package can easily cost US $ 8,000. All this surrounding comforts, however, cannot change a simple fact: the camps are located in some of the wildest game reserves on the African continent. The Okavango is home to wildlife as varied as the habitats created by the river of the same name. In the south, the camps are located on small islands and daily safaris take place at mokoros. Canoes are led by guides along papyrus reed canals filled with hippos, crocodiles and exotic birds. As you travel north by plane, the biggest game in the savannah appears: wildebeest, Cape buffalo, hyena, giraffe, antelope, zebra, lion, and of course, elephant.

Travel between camps is done only by small planes. In fact, the Cessna C-210 is so small that it can seat four rather uncomfortably, and luggage is a whole different issue. There are also a handful of other concerns. Landing an airplane on a dirt runway in a country where animals larger than SUVs roam can be a risk in itself. But a few minutes after landing safely at Xigera camp (pronounced Kéy · ger · a), I found myself sliding into a mokoro (Setswana for “canoe”) with Baeti Samotanzi as my guide. He stood in the back and silently guided us with the skill of a Venetian gondolier. I dipped a hand in the cool, pristine water as we made our way through a channel of papyrus reeds. The contrast between the dust of the Kalahari and the lush vegetation of the Okavango in such a short time was dizzying. “We hopped in a Land Rover and headed straight for the open savannah plains, and in less than an hour we came across another slain lion.”

As we approached a small island, Miss Oduetse greeted us with hot tea, cookies and a warm “Jumela!” If Africa has a face, it would certainly be hers, with a wide smile and flawless, radiant skin. As the sun fell on the shoulder of the earth, the hippos began to speak in the growls and sniffles that fill a wild world. “Don’t leave your tent tonight!” Baeti said as if it was both a question and a statement. He continued to laugh, as if the 2,000 pound beasts were the neighbor’s stray chickens.

A tent camp located on the plains of Duba is home to two lions, elephants and a variety of large hoofed mammals. Camp director Paul Thiery, who gave up a career as a stock broker in London to live in the bush of Botswana, can attest to the unpredictability of living in the midst of such an intense animal population. 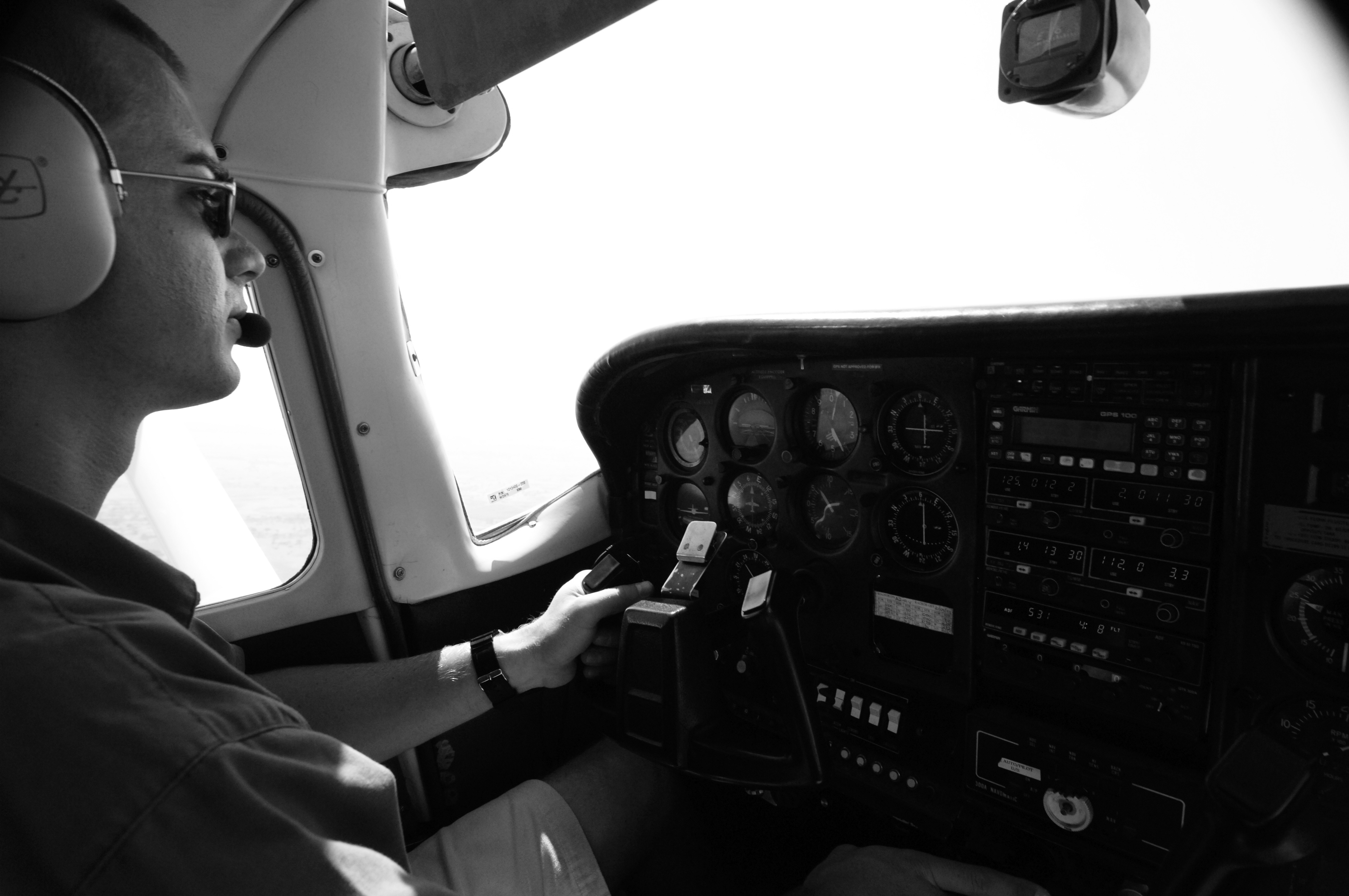 The pilot of a Cessna, the most efficient and scenic method of travel between camps on a safari

“Every day here is a surprise,” he said as we exchanged a conversation near the camp dining hall. No sooner had those words fallen from his lips than we turned to watch a bull elephant trumpeting, charging and generally angry chasing one of the cooks in the kitchen. The cook, Letty, threw herself in the doorway near where we stood, arriving breathless but laughing. Paul, with typical English aplomb, said: “I know you think this was meant to impress you, but he really is an angry wild elephant!” As he looked across the yard, he added, “You are… We are home. “

Shortly after, we immediately left the camp for the open savannah, and within an hour, we stumbled upon another slain lion. “Are we not a little too close?” I anxiously suggested my voice. Tikelo, our driver and guide, seemed oblivious to my concern and shut down the engine of the truck. “When the lions eat, we are safe,” he said softly. It still seemed a bit close for my taste, considering we stopped within five meters of the feasting lions. But Tikelo was right and as the sun set we watched them fall asleep one by one, exhausted from the work of gorging themselves. 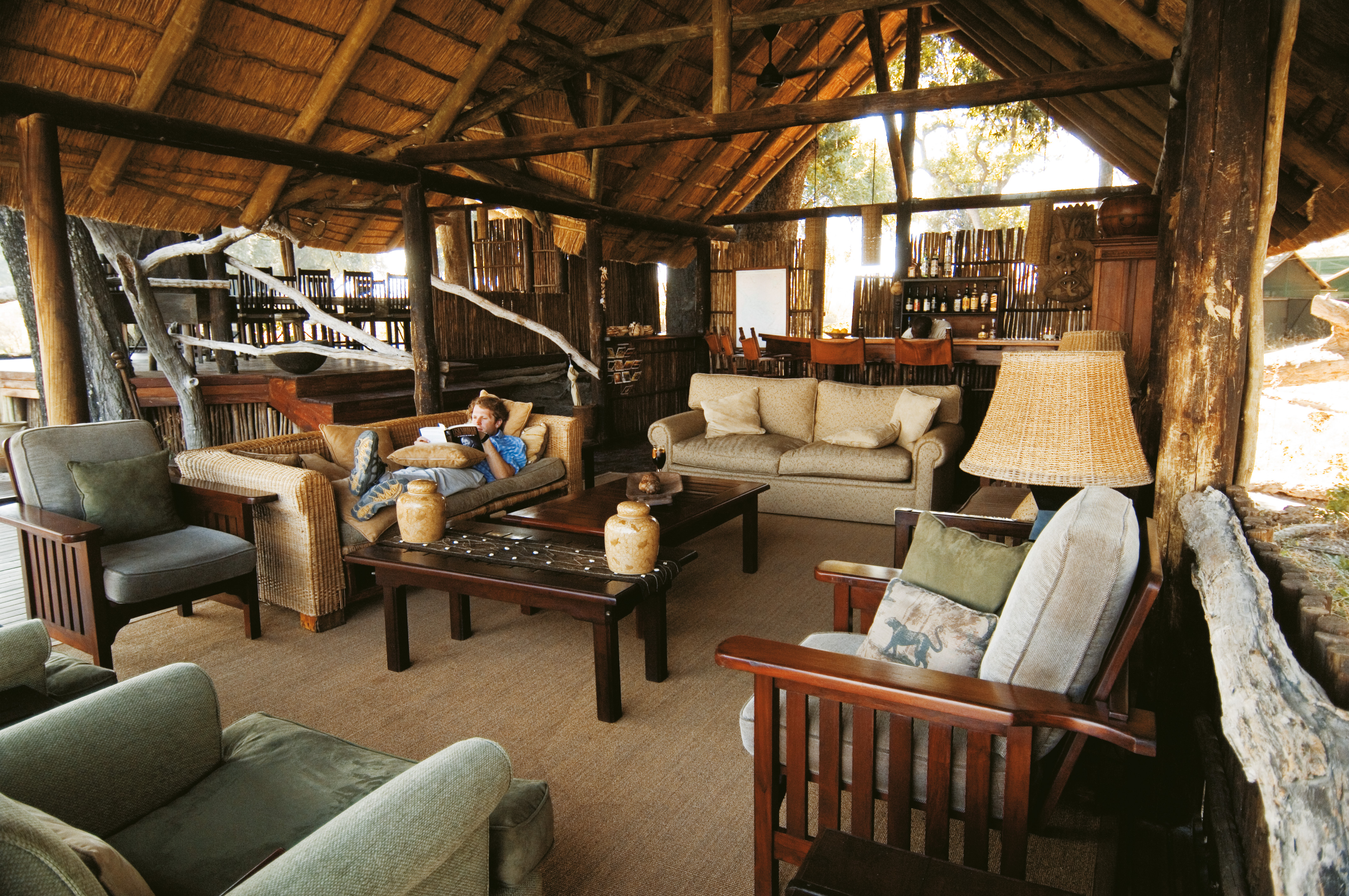 In the lounge and bar at Duba Plains Camp, where you can relax after a long day of safari

When we returned to camp there was the expected joy of a hot shower and a hot meal. The tent was, by everyone’s standards, lavishly appointed with Egyptian cotton towels, bathrobes, and a variety of scented soaps. Shortly after dressing in a clean shirt and pants, we headed to the central camp dining room for a quick appetizer, followed by dinner.

A wide selection of South African wines cross the border, as well as a well-stocked bar. Such tasty libations complement the chef’s preparation of elk stew, garlic vegetables, fresh buns and desserts, but don’t confuse Okavango camps with weight loss retreats, as the food is plentiful. 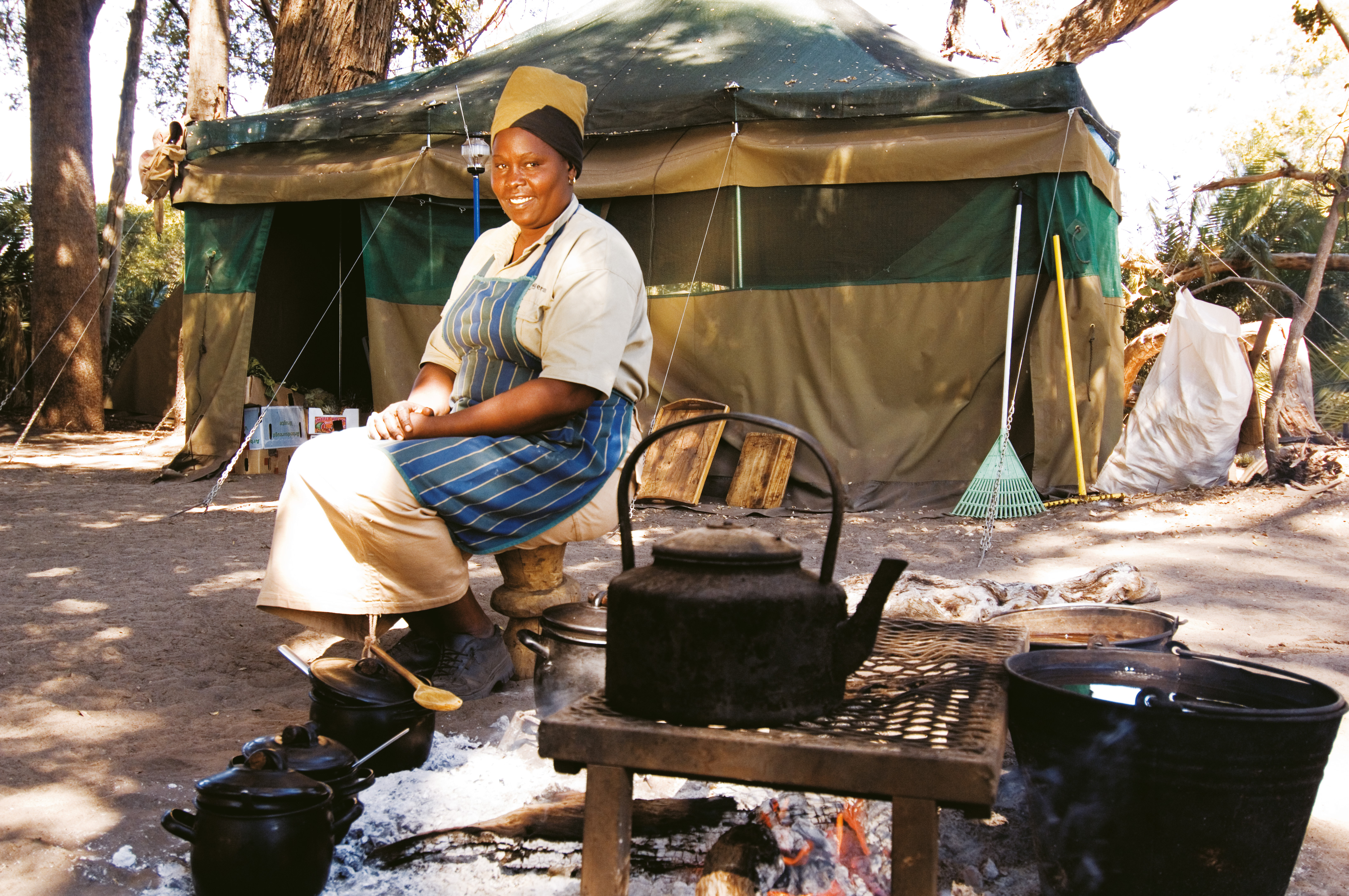 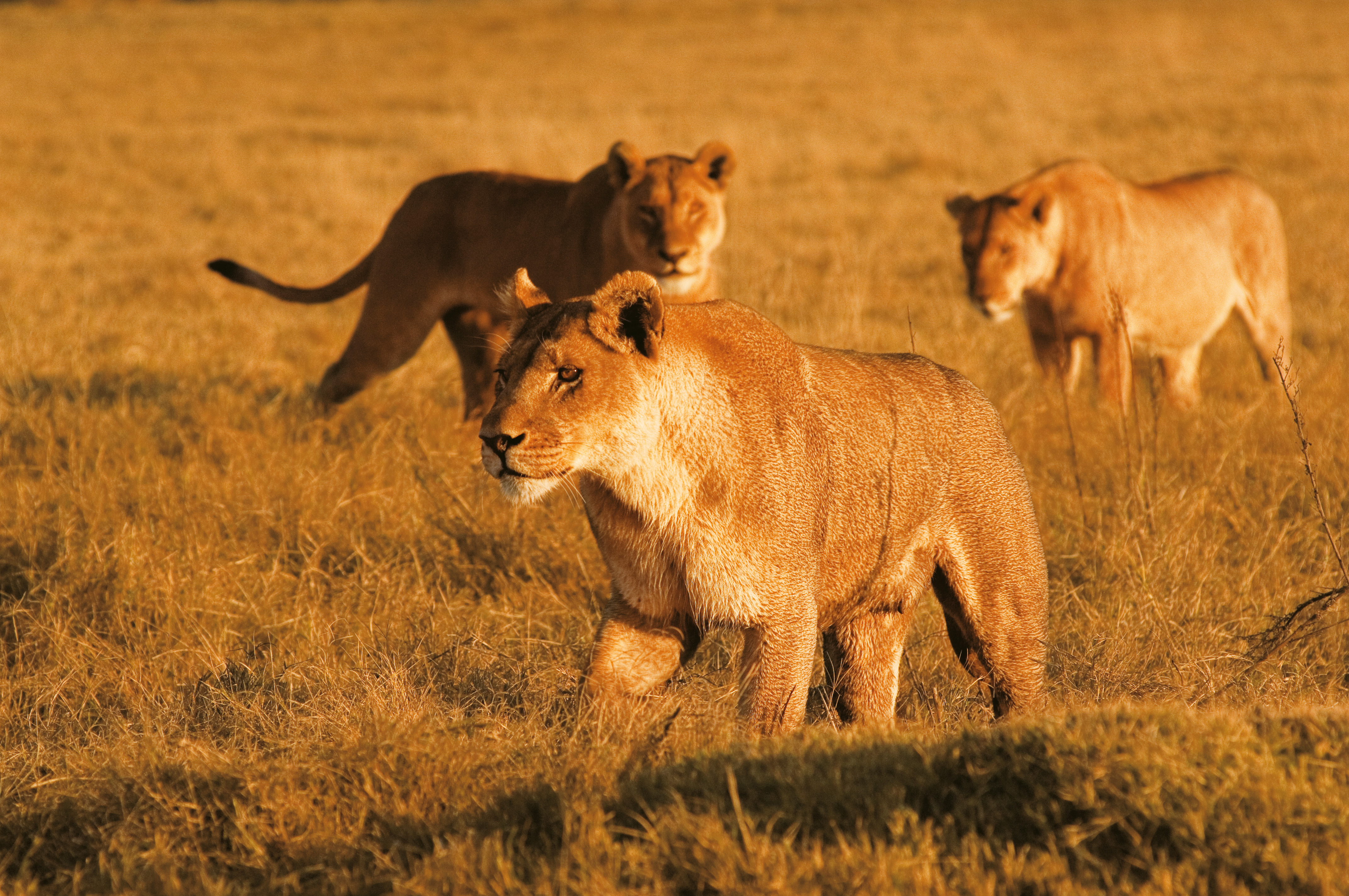 A lioness pride encircles their killing, which is a common site in the plains

August is winter in sub-equatorial Africa and surprisingly cold once the sun sets over the horizon. It was delicious to find a heating pad nestled between the cotton sheets of the bed. It offered a lot of relief and kept my toes warm as I snuggled under quilts and feather pillows, as I fell asleep to the distant roar of the “king of the jungle”.

A few days later, my Cessna Seofane (Setswana for “airplane”) rose again from the harsh savannah and headed north towards the dusty plains of Linyanti. Shortly after landing, a Land Rover rolled over to the plane with young Chris Mabure at the wheel. He helped load the equipment into the vehicle, and as he turned the ignition on, I was tempted to ask him if he had a driver’s license. But when I concluded that there were no roads for almost 1,500 kilometers, it seemed silly to ask. So we went back and forth for about half an hour before arriving at the beautiful Selinda camp. 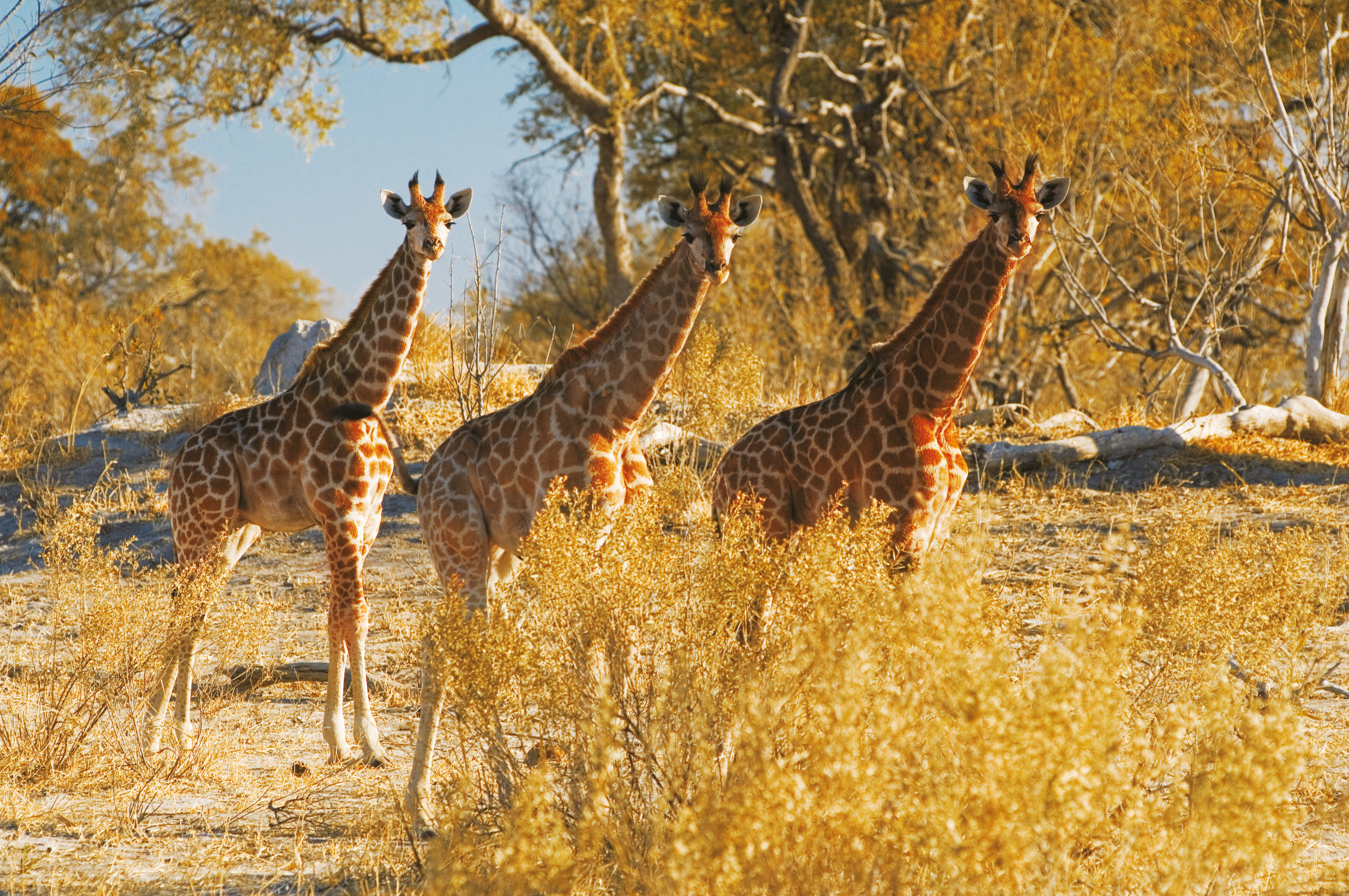 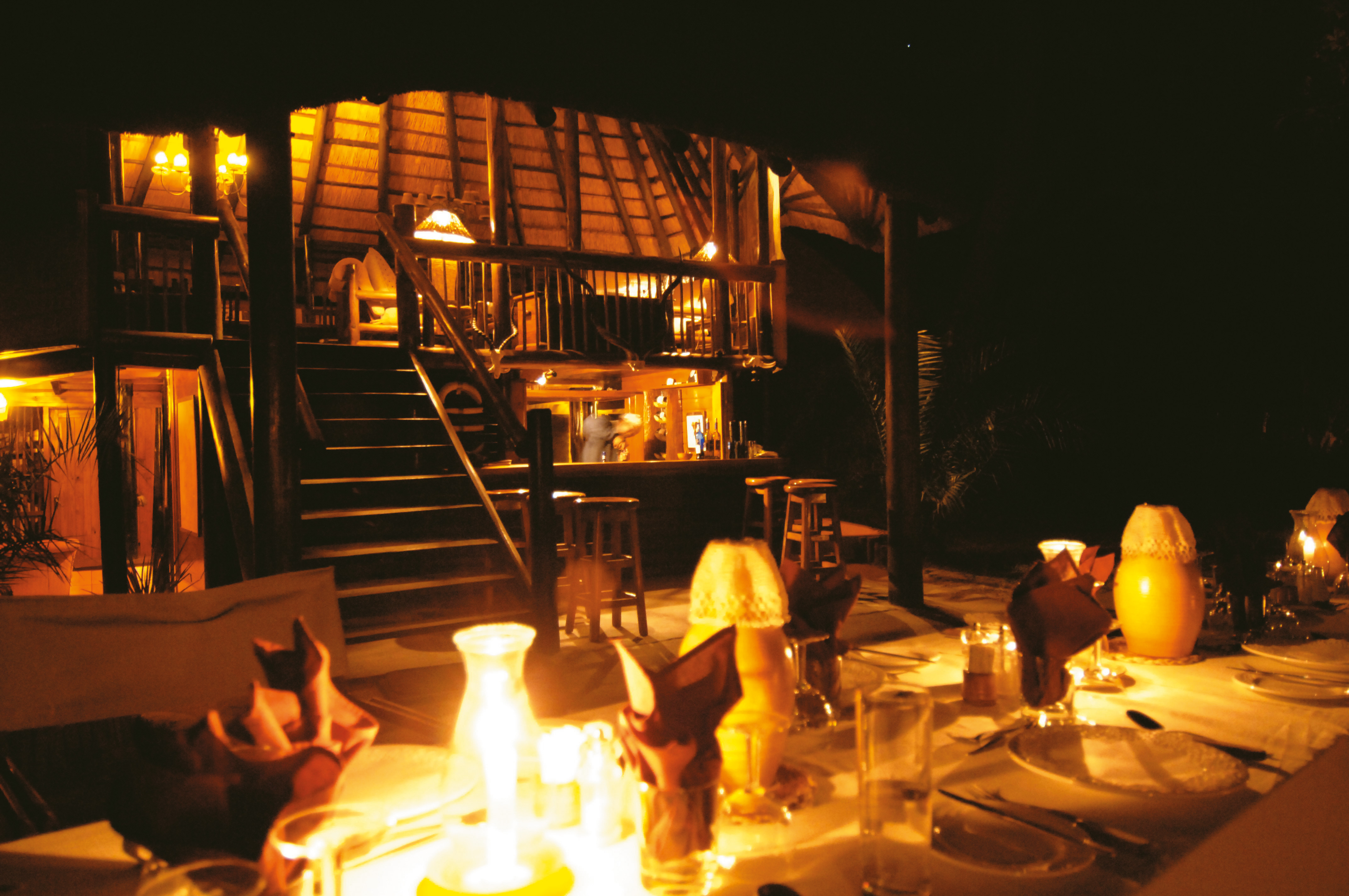 Chris Mabure had an infectious smile. “Are there a lot of elephants here? I asked, hoping we would see some of the huge herds that roamed this area.

“Sir,” he began with a mock exasperation in his voice, “by the time you leave Selinda’s camp you will never want to see another elephant again! I knew some of the estimated 110,000 elephants had been on the airstrip recently. There was a noticeable trail of basketball poop as evidence. 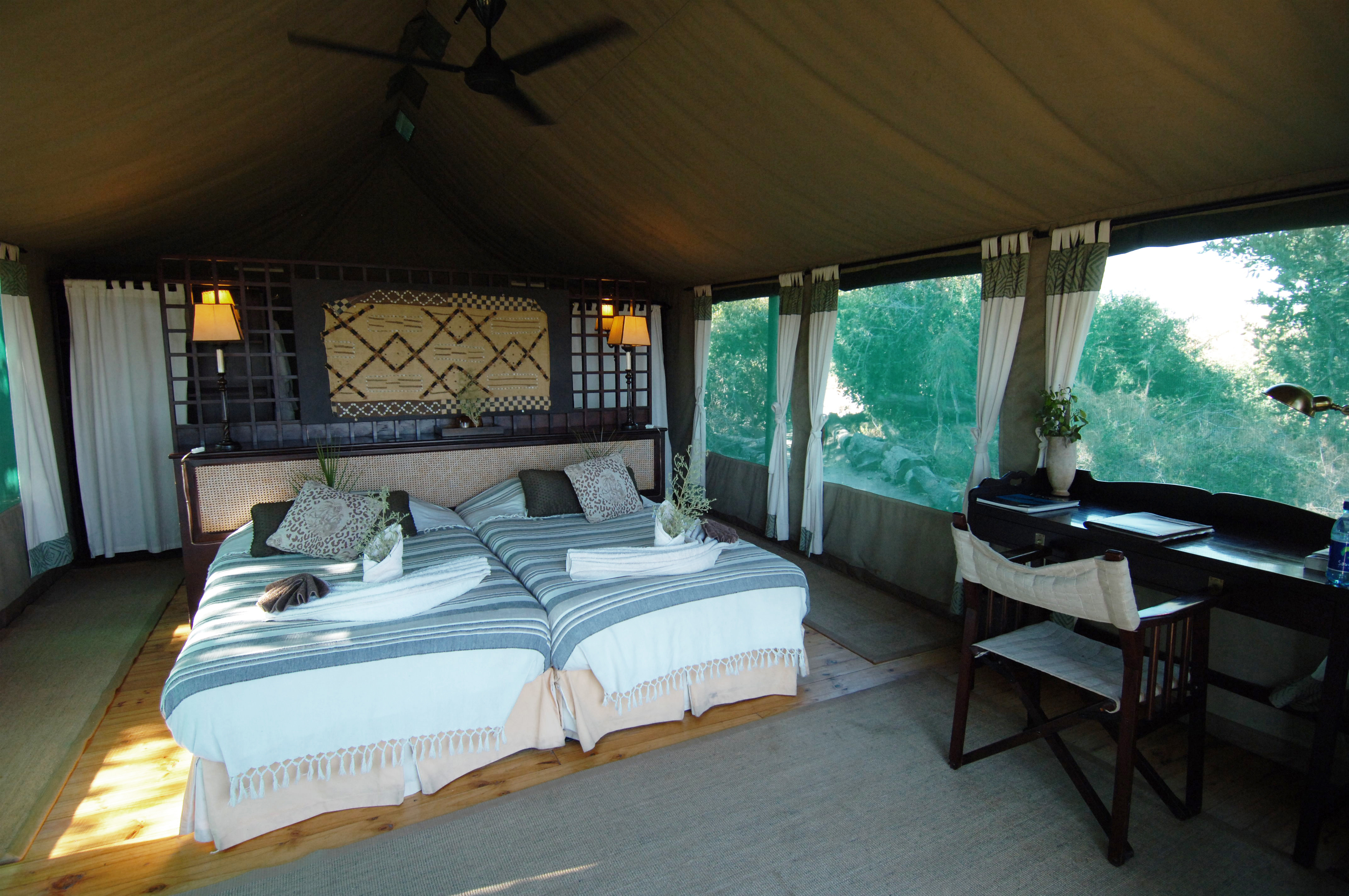 Michael and Bastienne Schwarzer ran the Selinda camp and they confirmed that the elephant was here in overwhelming numbers. If you want to see an elephant up close, don’t go to the zoo, go to Camp Selinda and you won’t be disappointed. The next day we sat at a waterhole until dusk and waited for over a thousand wild elephant heads to walk around for a drink. Being surrounded by so many elephants was both exhilarating and frightening. As darkness approached, the bulls got nervous and several loaded our jeep as we made our way through the herd. Nothing will grab your attention faster and your pulse will quicken than an elephant carrying 4000 kilograms for an exhilarating thrill. Once in Africa, enjoy every site and every sound, and take comfort in what to expect – no more camping; and you know how difficult it can be. 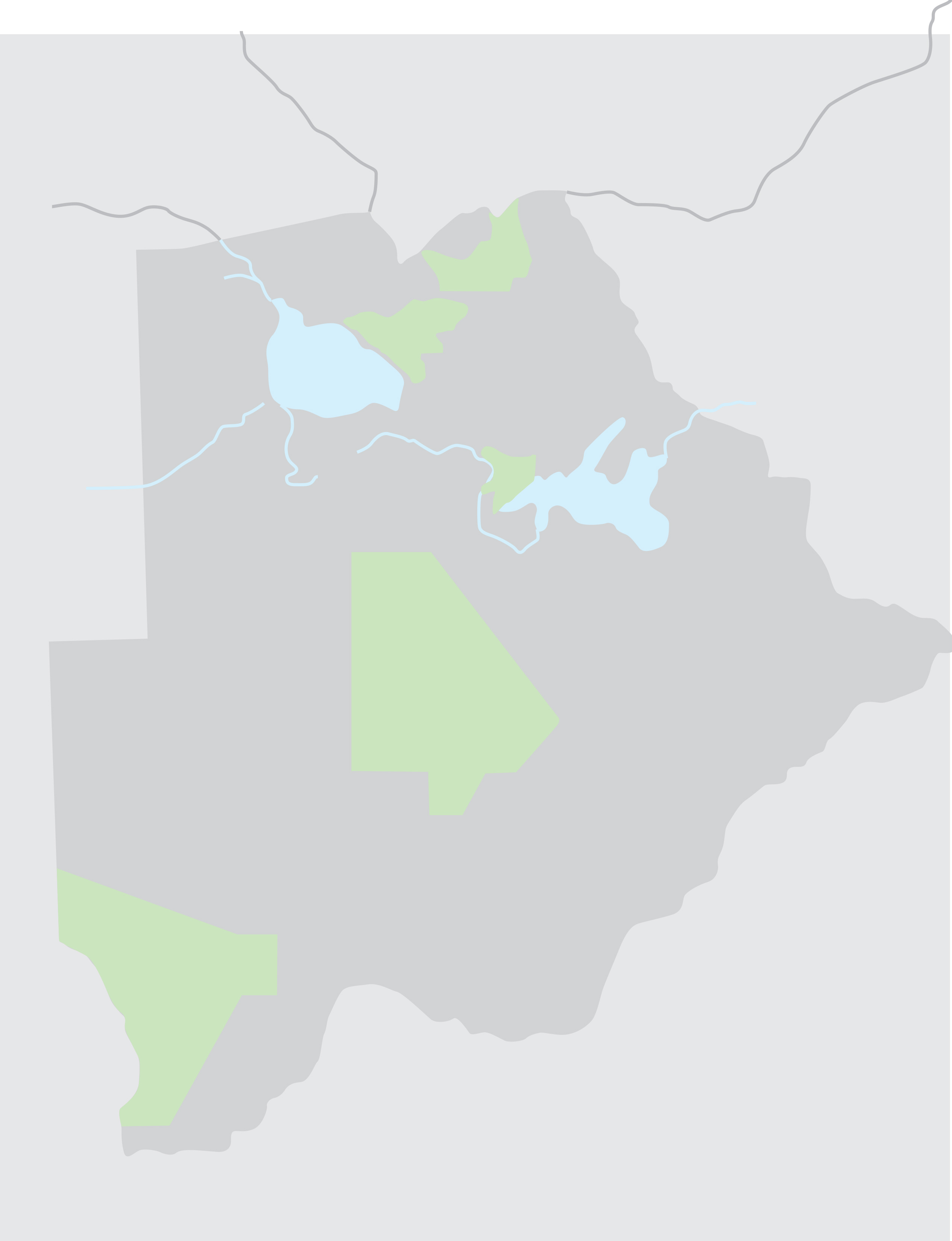 The travel article was written by Guy A. Sibilla and featured in the November 2007 issue of DA MAN.

How to grow vegetables in the Sahara ...