Riana Henning just before the finish line. Behind her is Niel Stander. Ettienne Coetzer (left), winner of the Kalahari Augrabies Extreme Marathon during the race. Designed for the North Cape sun. 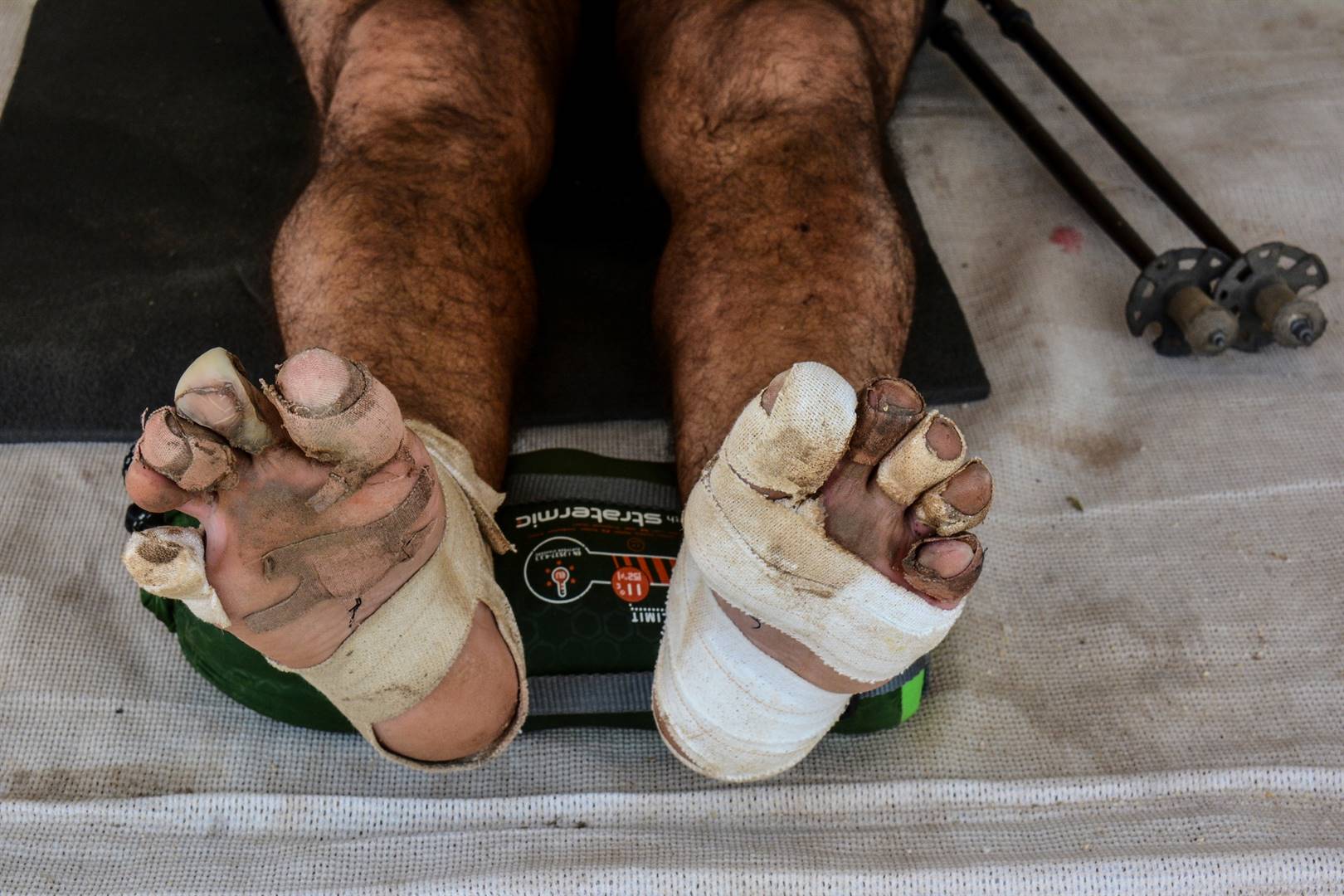 Participants sleep in stretched tents, without any luxury. No showers are available during the race – only the Orange River in some places.

With its desert landscapes and contrasting parts, known as the Green Kalahari, and with its vast grasslands, rocky outcrops and boulder-strewn koppies, the North Cape is gradually becoming the destination of choice for extreme sports and adventure.

This year saw the 21st edition of one of the extreme sports events that the province hosted for the first time on the international calendar; the Kalahari Augrabies Extreme Marathon (KAEM).

Friday, October 14, the participants crossed the finish line after nearly 250 km. Due to the extremely high daytime temperatures, especially on the third and fourth days, the initial distance was shortened slightly.

This self-contained, multi-stage run consists of six stages over seven days and is known as “Big Daddy” in running and desert circles around the world.

Ettienne Coetzer (39), of South African origin, originally from Upington and now a British citizen, was the first to cross the finish line. This former student of Duineveld High School is a pilot in the Army Air Corps.

Although they visited Augrabies Waterfall as children, they never hiked any of the hiking trails in this area, Coetzer says. He feels, however, that knowing the typical terrain helped him prepare for the race.

“I’ve never done trail running, let alone a multi-stage race. The most important thing that will remain for me in this race is the people. Wow, what an amazing group!” said Coetzer.

“You can’t fight this environment,” says Riana Henning, 53, the first woman to finish the race and finished seventh overall. It was also the first time that this occupational therapist from Pretoria had taken part in KAEM.

Seven years ago, she “started running seriously again” and always dreamed of running in the desert.

“It exceeded my expectations. I came in with the idea of ​​seeing how it goes. Before the race, I asked myself many questions, like my heavy backpack.

“But I ran with joy; free and without charge.

Henning says she ran very focused and calculated, but never pushed herself.

The “brutal beauty” of the environment and the great variety of birds contributed to his exceptional spiritual experience.

“Be one with what you’re doing and surrender to the environment,” says Henning, who has already done some 100 Milers.

The KAEM is a challenge, physical and mental, and requires good preparation. Yet it is described as a soul-filling adventure.

“A test of mental and physical strength with large amounts of introspection over seven days. The discovery of the human body’s ability to adapt to extreme conditions in a very limited time frame and to continually adapt is profound!

Daytime temperatures in the shade vary from 33°C to 45°C, or even more. At night, temperatures can drop to 5°C.

The KAEM is open to people aged 21 and over. Juniors 18-21 must have written permission from a parent or guardian. In addition, participants must undergo a medical examination.

Simoné Basson, member of the KAEM management team, specifies that it is mainly elderly people who take part in this race.

“This is not a bucket list event. It may start as one, but during the race, physical and mental challenges arise. And suddenly you’re part of a new family with amazing company.

Participants must carry enough food to support themselves during the race. Water is provided at the water points, but participants should carry a few liters of water with them.

The route is marked with highly visible markings such as marking tape and signs for direction on the route. A route guide and map help keep you on the road.

At night, participants sleep in stretched tents, with no luxuries or showers.

A full medical team is present for the duration of the event. This team, in collaboration with the race management, can withdraw a participant if it turns out that he cannot continue the race in extreme conditions.

The daily distances vary from 23 km to 40 km, with 70 km being the longest stage. This stage is done partly at night, forcing participants to wear headlamps.

KAEM was founded by Estienne Arndt, Nadia Arndt and Simon Kelly in 2000. The event is now run by the KAEM management team under the Augrabies Extreme Marathons CC.

Basson says the race normally takes place in October after winter hits and before the heat of summer arrives. The moon phase must also be taken into account as the race cannot take place during the dark moon phase.

The results of the first five positions are: The route is marked with highly visible markings, marking tape and signs for direction on the route. The course is a challenge, both physical and mental, and requires good preparation. The course passes through rocky outcrops and sandy riverbeds.